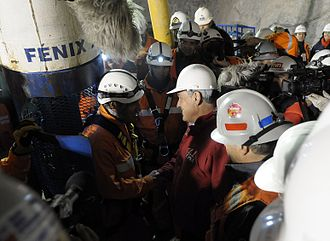 October 13th marks a decade since the successful rescue of the Chilean miners, following the longest underground entrapment in history. A cave-in at the San Jose copper-gold mine in Copiapó left 33 miners trapped at 2,300ft below ground, for 69 days.

In a scene akin to Hollywood’s Armageddon, the Chilean government enlisted a host of specialists including drilling teams and NASA experts to help in the rescue effort – including gas cylinder manufacturer Luxfer, which has its UK base in Nottingham.

On 13 October 2010, the final trapped Chileans were pain-stakingly hoisted to the surface in a specially-designed steel escape capsule called ‘Fenix’ – Phoenix in English, after the mythical bird that rose from the ashes.

The journey to the surface for all of the miners took two days and was made possible by oxygen delivered by four Luxfer L7X® 1-cubic-metre cylinders, which were housed inside the capsule.

The technology behind Luxfer’s cylinders was vital to the rescue effort. Made from Luxfer’s patented L7X® higher-strength aluminium alloy and filled to 3,000 psig, the cylinders were supplied by its long-time Chilean customer, Indura. They had to fit inside ‘Fenix’, which was just 21 inches in diameter to allow it to travel inside the tunnel that has been drilled.

Despite an estimated 1 billion people watching the rescue via video stream worldwide, Luxfer’s role in the mission was not widely known.

Mark Lawday, global sales director at Luxfer Gas Cylinders, which is a business unit of Luxfer Holdings PLC (NYSE:LXFR), said: “We’re pleased that Luxfer cylinders played a key role in such a critical operation, which was thankfully a success.

“Our cylinders were fit for purpose because they are durable, which is vital in this kind of extreme environment. They are also lightweight and this is important given the range of kit that had to be inside the rescue capsule, including safety harnesses and communications devices. This type of cylinder can be filled to high pressure too, meaning more oxygen was available to the miners as they made their ascent to the surface.”

The L7X® aluminium alloy cylinder used in the rescue effort is still manufactured today from the company’s Nottingham base. They can hold 50% more oxygen and are 40% lighter than steel varieties. With a 15 year warranty, the exact cylinders used in the operation could still be in use.

Luxfer-made cylinders are employed in a range of extreme environments around the world – by medics in hospitals, by divers in unchartered oceans, and as part of alternative fuel systems for trains and buses.

More than 15 million medical cylinders have been manufactured to date, with Luxfer counting the world’s largest gas companies among its customers.

Amid the COVID-29 pandemic, Luxfer recently donated 40 of its medical cylinders to the Mercy Ships – a non-governmental hospital ship offering life-saving care to those in critical need. It is the second donation by Luxfer to the Mercy Ships.

Lawday added: “We’re proud that Luxfer can lend a hand to others at times of need, and we’ll continue to do our best to make a positive social impact.”