For the past 25 years, it has become the ‘go-to’ choice for many authorities – powering municipal vehicles such as school buses, delivery vehicles and refuse trucks in North America. Popular with some car manufacturers in select parts of Europe too, bus operators on the continent have been quick to recognise its benefits with thousands of CNG buses currently in operation in countries including the UK, Italy, Spain, Turkey and France. 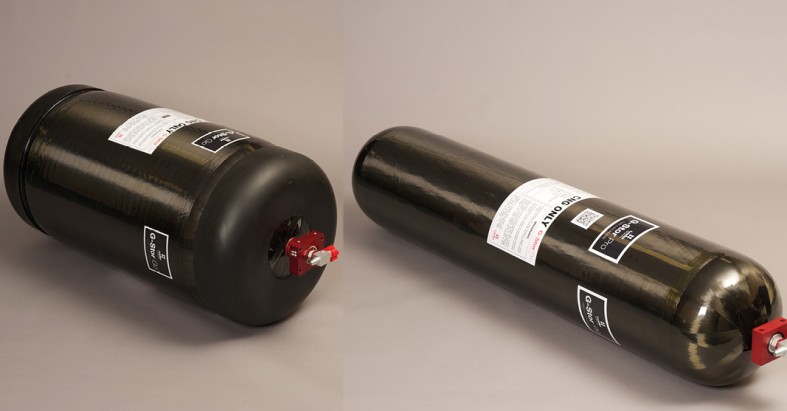 Luxfer has not only witnessed the ascent of the fuel first-hand, but has played an important role in creating and supplying CNG fuel systems to our transport partners, featuring our lightweight G-Stor™ Pro Type 3 or our G-Stor™ Go Type 4 carbon composite cylinder technology.

With CNG projects comprising 50% of Luxfer’s alternative fuel business in Europe today - and around 90% in North America - there are clear benefits of using compressed natural gas in transportation. These include:

• Reduced infrastructure barriers, as CNG can be taken from local gas networks

• A stable gas – no volatility when in use

• In natural abundance in some areas including North America, Russia and Azerbaijan – making it any obvious solution

• CNG created from biomethane is sustainable and environmentally friendly 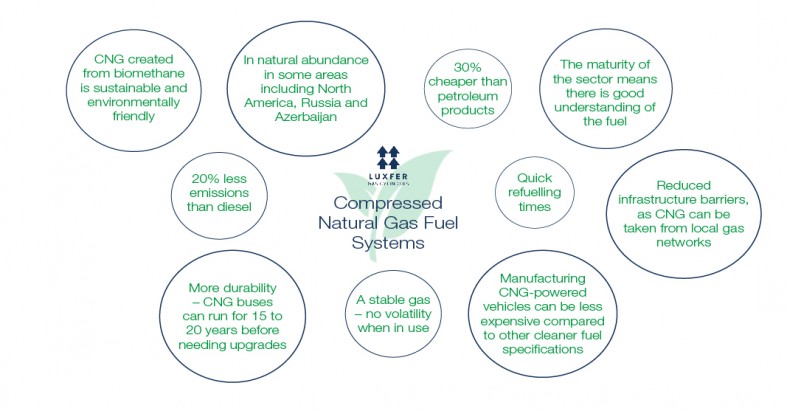 A proud past that shapes the future

Our 20-year legacy in compressed natural gas means that Luxfer has an established position within the alternative fuel sector. By being part of the very first conversations about how the gas could and should be used in transport systems, we have helped shape policy, developed new innovations and delivered solutions. Now, we are a safe and trusted partner when OEMs need advice on new project builds or retrofits.

As a pioneer in the space, our experts have also learnt many valuable lessons from CNG, which have directly informed how we manage the hydrogen projects we’re involved with today.  Because hydrogen is a fledgling area, there is still so much to learn. That’s where our history helps. Drawing from decades of expertise, Luxfer’s engineering teams lead and improve performance, push the boundaries for technological capabilities and increase value for customers.

With a very valid and established position in powering transportation, we consider CNG as something of a transition fuel. One that is greener and cheaper than traditional petroleum products and has opened manufacturers’ and authorities’ eyes to the possibilities of utilising cleaner alternatives.

We know the potential of hydrogen as the cleanest option on the market, but we also acknowledge that some organisations aren’t yet ready to overcome the inherent challenges it brings, such as infrastructure issues, increased investment costs and a lack of global knowledge on the gas.

However, as a gateway fuel, CNG offers the best of both worlds, and over the next five to ten years we believe it will be instrumental in encouraging commercial vehicle manufactures and operators to explore cleaner and greener fuels, such as hydrogen and renewable natural gas.

Latest trends suggest the global CNG vehicles market will rise at a considerable rate and will be worth more than $48340 million by 2028.

Defined as a green source of energy, biomethane is a naturally occurring gas produced by the anaerobic digestion of organic matter such as dead animal and plant material, manure, sewage and organic waste.

Also known as renewable natural gas (RNG), biomethane makes CNG-powered vehicles the cleanest ever by directing harmful gases, which would have gone into the air, into vehicle systems. The impact is lower water, soil and air pollution.

Sweden is one country already effectively using biogas and biomethane across its road network – with ambitions for completely fossil-free transportation by 2030.  No country in the world uses as much biogas in road transport as Sweden does. Currently over half of their gas vehicles are fuelled by biogas (over half of the biogas is upgraded to biomethane) and the rest by natural gas. Their ambition is to completely phase out the use of natural gas over the next eight years.

Another country that is leading the charge with biomethane is France. French firms Waga Energy and Veolia announced in spring 2022 that they have commissioned the largest biomethane production system in France. The Claye-Souilly facility, near Paris, will be capable of producing 120 GWh of renewable natural gas (RNG) each year. Injected directly into the gas network, that’s enough energy to power 20,000 households.