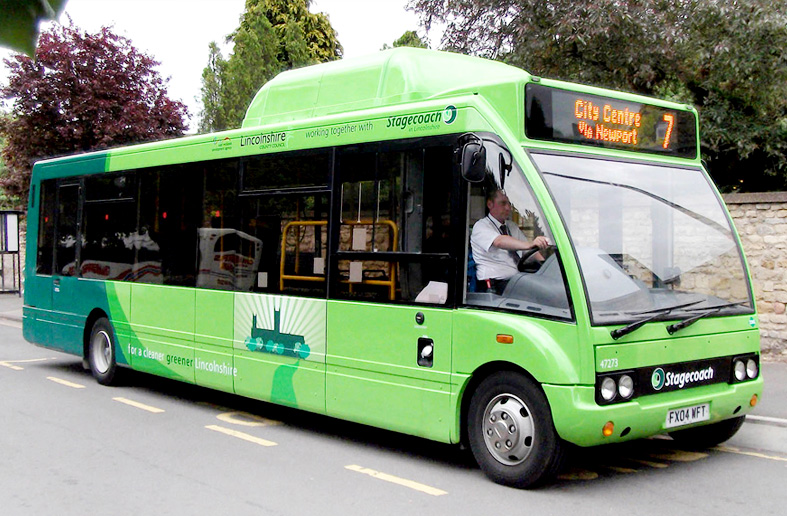 A fleet of 11 ecologically innovative dual fuel buses that run on both biomethane and diesel entered service in Lincolnshire, England, in late May. The Hardstaff Group converted the Optare Solo buses, using roof-mounted Luxfer carbon composite cylinders to contain biomethane made from recycled household and animal waste.

Biomethane/diesel buses provide up to a 40% reduction in CO2 emissions, as well as improved fuel economy.

All the buses had been in service for six or seven years, with each clocking 300,000 miles (482,800 kilometers) or more before being completely refurbished and converted to run on both fuels.

The direct £260,000 ($427,750) conversion cost was funded by the Lincolnshire County Council and the East Midlands Development Agency with operator Stagecoach East Midlands providing the buses from its Lincoln fleet. A further £100,000 ($164,520) in joint funding has been invested in fueling infrastructure.

Preparation of the 11 vehicles began at Optare’s low-carbon conversion centre in Blackburn, where the Cummins engines were taken out and shipped to Hardstaff for conversion.

Meanwhile, Optare modified the roof structure of each bus, installing a purpose-built cradle for Luxfer carbon composite cylinders to contain the biomethane, as well as a fibreglass cover to protect the cylinders.

The converted engines were then reinstalled, and the vehicles were sent to Hardstaff for final connections and system checks. The conversion work also required re-certification of the buses for street use, which was carried out at the Optare plant in Leeds.

Optare Chief Operating Officer Glenn Saint commented: “This is a very good application of the green technology that we can offer under our Eco Drive programme. It solves a number of issues at a stroke. CO2 emissions and fuel costs are reduced, and material that would otherwise be buried in the ground—at considerable cost—can be used to produce the biomethane, with the resultant waste providing a useful fertiliser for agricultural use.

“The fact that we are able to offer it as a retrofit on two widely used engines and that such conversions qualify for the higher rate of BSOG [Bus Service Operators Grant] makes this an attractive and viable option for any operator seeking to ‘green’ their fleet quickly without having to buy new vehicles—although we are happy to fit the Dual Fuel system during new vehicle build, too.”

At ceremonies in Lincolnshire to launch the buses, Stagecoach Group Chief Executive Brian Souter said: “Waste is a big issue for every family and household up and down the country. This is an innovative way of taking something that’s a big problem for society and turning it into a fuel of the future. It means we can offer greener travel to our customers and cut our own carbon footprint.” 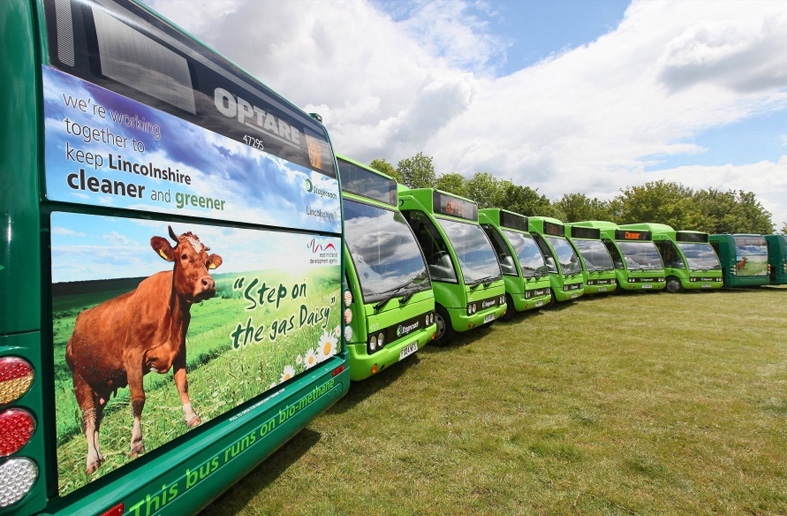