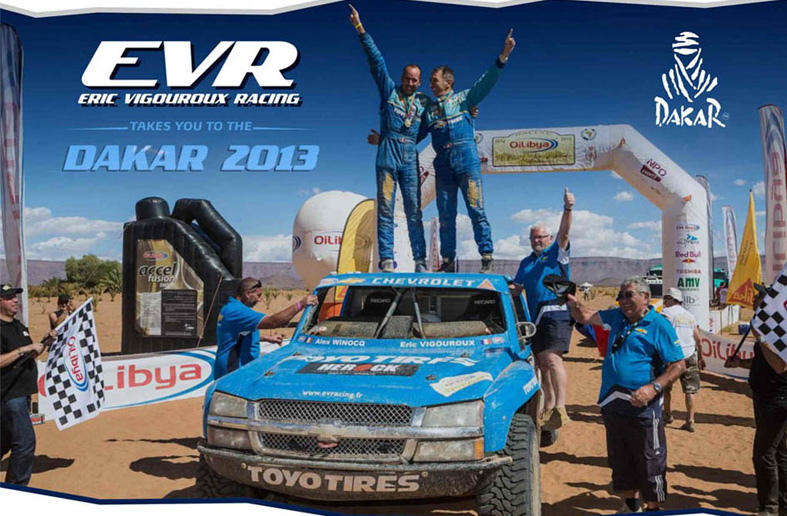 When the Eric Vigouroux Racing (EVR) team’s truck roars off to compete in the world-famous Dakar Rally in 2013, Luxfer composite cylinders will be on board to allow the driver to raise or lower tire pressures to adapt to off-road terrain changes, a key factor in maintaining traction on loose surfaces such as sand.

Kjeld Johansen, Luxfer’s Technology Manager at Luxfer Riverside, has been working with the team to supply four L87E composite cylinders for the EVR Chevrolet Trophy Truck that will compete in the 2013 Dakar Rally, which will be run Peru through Argentina to Chile from January 5 through 20. Luxfer is an official EVR sponsor for the event.

The EVR team has won all the races in which it has participated, including the Féderation Internationale de l’Automobile (FIA) World Cup earlier this year in the 2-wheel drive (2WD) category. In the Rally of Morroco last October, the team posted the highest overall standings while racing against well-known professional teams.

Eric Vigourou grew up in the French Massif Central (not far from the Luxfer France cylinder manufacturing facility in Gerzat), where he rode off-road bikes and quads. As a teenager, he was fascinated by images of Dakar races, and he resolved to do it himself one day.

After several successful seasons, Eric and his team are convinced that they can make a good showing in Dakar 2013.

This will be Eric’s comeback to the Dakar after his last participation in 2009, when he drove a Hummer for Robby Gordon’s team. At that time, the American team finished the race with their best results ever, placing two cars among the first 15.

About the Dakar Rally

The Dakar Rally (or simply “The Dakar”, formerly known as “The Paris–Dakar” or “Paris to Dakar Rally”) is an annual Dakar Series Rally-raid type of off-road race organized by the Amaury Sport Organization.

The race originated in 1978, a year after racer Thierry Sabine got lost in the desert and decided that it would be a good location for an annual rally.

Most events since the race inception were from Paris, France, to Dakar, Senegal, but after security threats in Mauritania led to the cancellation of the 2008 race, the 2009 Dakar Rally was run in South America (Argentina and Chile). It was the first time the race took place outside Europe and Africa, and it has stayed in South America from 2009 to the present. The race is open to amateur and professional entries. Amateurs typically make up about 80 percent of participants.

The Dakar is an off-road endurance race, which is called a rally-raid rather than a conventional rally. Terrain the competitors traverse is much rougher, and trucks used are true off-road vehicles rather than the modified on-road vehicles used in rallies. Most of the special sections are off-road: crossing dunes, mud, camel grass, rocks and various other desert terrain. The distances of each stage covered vary from short distances up to 800–900 kilometers (500–560 miles) per day.