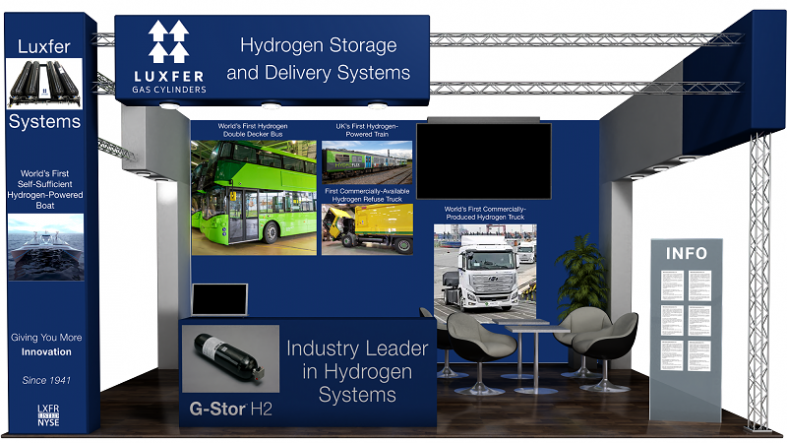 UK, Thursday 1 October 2020: Tipped to be the largest online conference and exhibition of its nature this year, October’s Mission Hydrogen welcomes the ‘who’s who’ from the sector including Luxfer Gas Cylinders, as it showcases global firsts in alternative fuel systems.

Luxfer Gas Cylinders, the world’s largest manufacturer of high-pressure composite and aluminum cylinders, is joining the online event as an exhibitor on October 8th, profiling from its virtual booth, its industry-leading hydrogen storage and delivery systems.

A spotlight will be placed on the company’s alternative fuel expertise, specifically systems featuring its G-Stor™ H2 hydrogen cylinders – for which the brand is internationally renowned as a partner in zero-emission hydrogen powered vehicles.

Mark Lawday, a Director at Luxfer Gas Cylinders who will be part of the team manning the show, explains: “We’re looking forward to meeting with innovators and like-minded brands who recognise the benefits of hydrogen and want to see how our technology is being used to effect positive change around the world.

“Anyone visiting our stand can look through our literature or have a live chat with one of the Luxfer team and we’re expecting the conversations to be heavily focused on our extensive experience working with leading manufacturers to deliver hydrogen-powered vehicles that are commercially available today, and how we can valuably contribute to future projects.”

Now in its eighth decade of business, Luxfer’s legacy in hydrogen spans more than 20 years including its role pioneering the hydrogen tank and valve technology, and more recently a series of world-first accolades. These include:

Lawday continues: “Interest in alternative fuels is at an all-time high, thanks to net zero emission targets set by global leaders. Hydrogen provides a very real solution for transport, most recently praised by UK Prime Minister Boris Johnson at the UN Climate Conference. Thanks to our heritage and expertise in the sector, we are extremely well placed to help drive programmes on from conception to realisation.”

Tickets are still available for Mission Hydrogen which starts at 6am Central European Time on Thursday 8th October and runs for 24 hours. It is expected to attract thousands of attendees from across the world, including engineers, scientists and policymakers and will feature over 30 high-profile expert talks. Luxfer’s stand can be visited by hovering over the brand’s logo on event day. Visit: www.hydrogen-online-conference.com/tickets.

Luxfer Gas Cylinders (www.luxfercylinders.com) is the world’s largest manufacturer of high-pressure composite and aluminum cylinders. More than 70 million Luxfer cylinders in service around the world have an exemplary record for dependability and safety in a variety of applications, including firefighter and first-responder life support, medical, fire extinguishers, alternative fuel, specialty gas, beverage, aerospace, inflation, scuba and performance racing. An operating company of Luxfer Holdings PLC (NYSE:LXFR), Luxfer Gas Cylinders is based in Riverside, California, and has manufacturing facilities in the U.S., England, Canada, China and India. For more information on Luxfer Gas Cylinders visit: www.luxfercylinders.com.