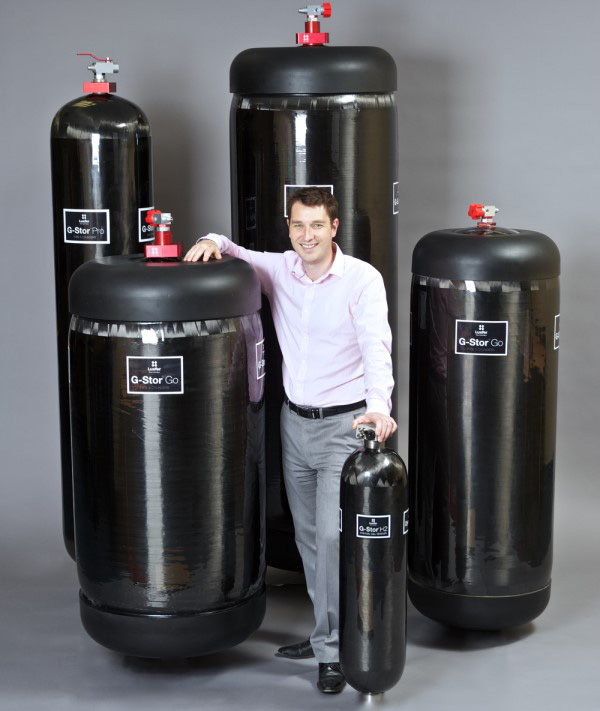 UK, 31 January 2021:  In a significant acceleration towards the UK’s green energy ambitions, the hydrogen bus hits the streets of Aberdeen in a world-first this week – featuring a bespoke system from Luxfer Gas Cylinders.

The zero emission double decker was manufactured by Wrightbus, who enlisted the expertise of Luxfer to design, manufacture and supply the hydrogen fuel system that powers the bus.

The system for the 15-strong fleet features Luxfer’s G-Stor™ H2 hydrogen cylinders. Around 150,000 of these types of cylinders are already in service worldwide, equipping over 10,000 CNG buses and an increasing number of hydrogen buses plus approximately 4,500 refuse vehicles.

Mark Lawday, a Director at Luxfer Gas Cylinders explains: “The hydrogen economy is now taking off, but it’s an area we’ve worked in for three decades. Luxfer has pioneered hydrogen storage systems and valve technology, and we were brought into this project by Wrightbus in 2017 to help design how the hydrogen system could work to deliver the best range, in a cost effective solution.

“Aberdeen has been at the forefront of hydrogen, proving it is viable, and we worked with them on introducing an original fleet of 10 hydrogen buses to the city too. It’s fantastic that these new double deckers will begin their journeys with passengers soon.”

The Aberdeen launch is part of the €32million EU-funded JIVE (Joint Initiative for hydrogen Vehicles across Europe) project, which is deploying 139 zero emission buses and refuelling stations across five countries. In the UK, Aberdeen, Liverpool, Birmingham and London will welcome the green fleets, with Aberdeen home to the very first double deckers to operate.

Wrightbus chairman, Jo Bamford, said it was a proud moment to see the buses in full operation for the first time.

He said: “Everyone at Wrightbus is incredibly proud to see the world’s-first hydrogen double decker bus fleet in full service and carrying passengers around the streets of Aberdeen. It marks a pivotal moment in the city’s commitment to reaching net zero.

“We will see further Wrightbus hydrogen buses in locations across the UK, with fleets due to launch in Birmingham and London later this year. It’s vital that other towns and cities sit up and take note of their example.

"Hydrogen has an important part to play in the decarbonisation of transport and the reduction in CO2 levels that we need to reach to ensure a net zero future, and we're delighted to be working with Luxfer Gas Cylinders towards achieving this.”

Luxfer has itself invested in its alternative fuel capability, in 2019 expanding its Nottingham base in response to demand from customers across the transport sector, including bus manufacturers.

How the onboard hydrogen technology works

Mark Lawday adds: “At Luxfer, we believe in creating a greener world for future generations, and we’re passionate that hydrogen is the key to safe and sustainable transport.
“We’re working with a number of commercial vehicle manufacturers around the world to supply industry leading hydrogen cylinders and, in many cases, to design hydrogen fuel systems to meet the highest technological and safety requirements.”
Luxfer’s legacy in hydrogen includes a series of milestones. These include:

Luxfer Gas Cylinders (www.luxfercylinders.com) is the world’s largest manufacturer of high-pressure composite and aluminum cylinders. More than 70 million Luxfer cylinders in service around the world have an exemplary record for dependability and safety in a variety of applications, including firefighter and first-responder life support, medical, fire extinguishers, alternative fuel, specialty gas, beverage, aerospace, inflation, scuba and performance racing. An operating company of Luxfer Holdings PLC (NYSE:LXFR), Luxfer Gas Cylinders is based in Riverside, California, and has manufacturing facilities in the U.S., England, Canada, China and India. For more information on Luxfer Gas Cylinders visit: https://www.luxfercylinders.com/.