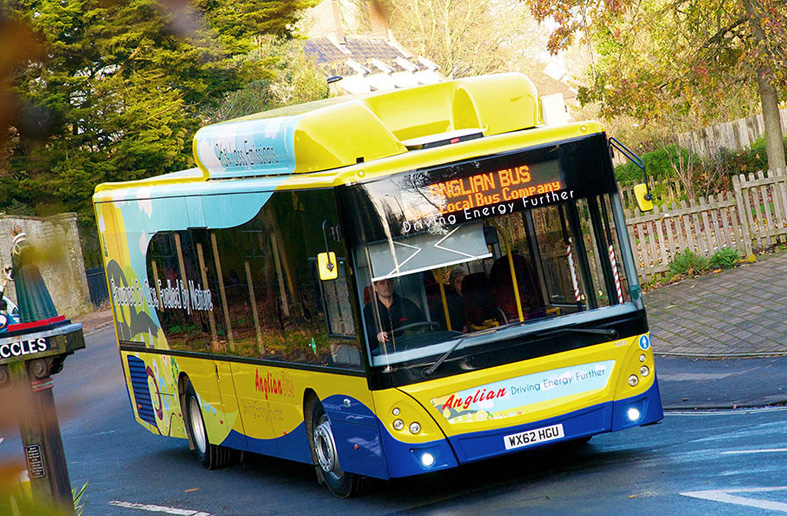 Based in Munich, Germany, MAN Truck and Bus is the biggest company of the MAN Group and a top-ranking international supplier of commercial vehicles and transport solutions. The MAN Group is one of Europe's leading commercial vehicle, engine and mechanical engineering companies, generating annual revenue of around 15.8 billion euros and employing a workforce of approximately 54,300 worldwide. Here is the text of the MAN news release:

Driver, passenger and public safety are cited as key reasons why MAN Truck & Bus UK has confirmed its commitment to Luxfer-Dynetek for the provision of fuel tanks on its EcoCity gas bus range. In addition, says MAN, it believes the Luxfer-Dynetek solution provides greater operationally efficiencies compared to others available on the market. Making the announcement, Ian McLean, Head of Bus & Coach operations in the UK, said, “We were very aware of the fact that there are cheaper, much cheaper tanks on the market, but didn’t feel we could use that as a reason to move away from our strict safety and standards policies. Yes, we could have made the buses significantly lower priced, but the UK market expects nothing less than safety, reliability and performance from MAN products and has every right to do so. And that means a lot to us.”

Because of the operating practices of the UK bus market, gas buses going into service are largely expected to meet the refuelling fill-time of their diesel powered equivalents, which in gas terms means what is referred to as ‘fast fill’. The Luxfer-Dynetek Type 3 product, which has an aluminium liner with aerospace grade carbon fibre wrapping material, is used exclusively on the MAN EcoCity range.

This, says the company, provides a very safe and robust solution with fast-fill operations. In addition, the product’s strong thermal properties offer a further key benefit for the operator: the gas cools very efficiently in the MAN choice of tank during fast-fill operations, through heat-transfer to the outside surface as well heat absorption in the aluminium wall, so a high temperature build-up in the gas that can occur in Type 4 tanks [with plastic liners] is avoided, thus reducing fill-time of the MAN EcoCity tanks and providing greater useable gas capacity.

“We had some real concerns about using anything other than the Luxfer-Dynetek products in light of the UK fast-fill requirements,” said McLean. “We are quite sure this is the best tank on the market and were not prepared to sacrifice that peace of mind just for the sake of a cheaper bus. MAN EcoCity operators, such as Anglian Bus, have now proved in real service conditions that a regular saving over Euro3 buses, and the UK fleet has many of those coming up for replacement, could be as much as £10,000 per year, per bus. Even against current Euro 5 models only just starting out on their operating life, the savings are expected to be more than enough to justify the investment, so why cut corners on such a fundamental safety and performance item as the fuel tank?”

Dr Chris Rasche, Managing Director for Alternative Fuel solutions for Luxfer-Dynetek Europe added, “Luxfer-Dynetek has worked with the MAN Group through-out Europe over many years and were more than happy to be part of the EcoCity project in the UK. We share the same safety and performance ideals as the manufacturer and work closely with their teams in the UK and Germany.”