Luxfer Gas Cylinders has received an increasing number of inquiries about the difference between “bowed” and “bulged” aluminum cylinders. The pictures and information below are intended to clarify this important difference.

A bow is a slight curve in the sidewall of an aluminum cylinder (see image above). A fairly common cosmetic feature, a bow is not dangerous and does not affect cylinder performance. A bow is an occasional by-product of the manufacturing process, not a manufacturing defect. Bows occur most often in taller cylinders, including scuba cylinders with a capacity of 80 cubic feet or more. A typical bowed cylinder has one convex side curving slightly outward and an opposite concave side (180° degrees away) curving slightly inward. The curves are long and gradual, covering much of the length of the cylinder sidewall. Most bows are barely discernible with the naked eye, but they sometimes become noticeable when you hold a straight edge against the cylinder wall and rotate the cylinder to reveal both the convex and concave sides. More severely bowed cylinders are sometimes called “banana shaped,” and even these cylinders are safe to use. Infrequently a cylinder will have one straight side and one slightly convex (outward curving) side. Such a condition, called an unparallel sidewall or a plano-convexity, is also a type of bow. It does not affect cylinder performance. Inspectors should be careful not to misidentify the harmless, slightly convex side of a bowed cylinder as a bulge, which is completely different and a very rare condition.

A bow is often so subtle that the naked eye has difficulty detecting it. (In the picture above, the bow has been exaggerated somewhat to make it clearly visible.) Using a straight edge will usually reveal convexity and concavity. Bear in mind that the convex (outward curving) side is sometimes more pronounced than the concave side. Do not mistake the convexity of a bow for a bulge! (For more information about bulges, see the following section.) 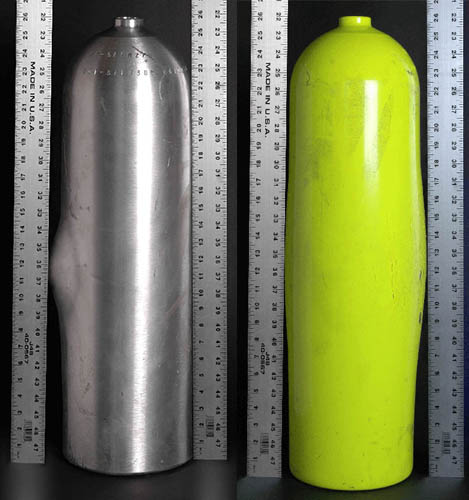 A bulge (pictured above) is an extremely rare, dangerous condition. Bulged cylinders must be immediately condemned and removed from service. Unlike a bow, which is usually slight and sometimes difficult to see, a bulge is generally very pronounced and obvious, even to the naked eye. Bulges occur in cylinders that have been overheated or in cylinders with sidewalls thinned by severe corrosion. There are two basic types of bulges. A long, convex bulge protrudes outward noticeably on one side or around the entire circumference of the cylinder (as in the yellow cylinder shown above on the left); such a bulge occurs when an entire cylinder has been exposed to high heat. A smaller, “goose-egg-shaped” bulge (cylinder at right, above) usually indicates localized overheating, which is the result of “spot annealing.”

If you are uncertain whether a cylinder is bulged, remove it from service and contact Luxfer Customer Service before condemning the cylinder.